The 16 CFR Part 1633 law requires mattresses to have fire barrier fabric that is fire resistant and self-extinguishing. 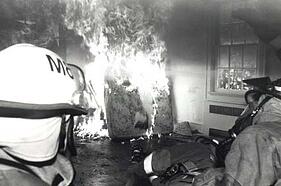 When a mattress catches fire, there comes a time several minutes later when flash-over occurs. The Consumer Products Safety Commission (CPSC) describes flashover as “the point at which the entire contents of a room are ignited simultaneously by radiant heat, making conditions in the room untenable and safe exit from the room impossible.”

During flash-over, room temperatures typically exceed 1100 degrees Fahrenheit and 1470 degrees Fahrenheit. That type of heat is responsible for about two-thirds of all fatalities attributed to mattress fires. Or at least they did, until the U.S. Congress and CPSC enacted 16 CFR Part 1633, the Standard for the Flammability (Open Flame) of Mattress Sets; Final Rule which took effect July 1, 2007.

The statute requires mattress makers to incorporate fire barrier fabrics which are flame-resistant and self-extinguishing when a flame source is removed into the manufacture of their bedding products. At the time the law was implemented, these fabrics, such as those in Herculite’s Sure-Chek line of fire barrier fabrics, were expected to result in about 250 fewer deaths and roughly 1250 fewer injuries caused by mattress fires. The monetary savings to society at large, the CPSC estimated would be somewhere between approximately $500 million and $1.1 billion in the first year the legislation was in force.

Some states and municipalities, such as California and Boston, Massachusetts, have some additional standards to which mattress manufacturers must comply.

Designed to be integrated into a mattress by forming a layer between the exterior mattress tick and the interior support cushion, fire barrier fabrics, such as Sure-Chek Blaze Blocker FG and and Sure-Chek BlazeBlocker HP work like this:

When the material comes into contact with a flame, the surface of the fabric is designed to char. This inhibits the spread of the flame. The fire barrier fabric yarns maintain a stable framework for the char layer, and restrict airflow depleting the fuel for the flame, thus reducing the flames access to the materials deeper inside the mattress.

Standing the Test of Time… and Heat

As with most contemporary regulations, the CPSC requires manufacturers to test and certify their fire barrier fabrics to ensure they meet or exceed the federal standards. These standards include proper labeling of the fabrics as well.

The fire barrier fabric tests look for two things: time and heat release. The time for testing is set at 30 minutes, the amount of time it usually takes to detect a mattress fire and the amount of heat released during that time period (not to exceed 15  megajoules (MJ) in the first 10 minutes or 200 kilowatts in the first 30 minutes). Room temperature and humidity are also factored into test conditions and are based on common measurements for these conditions.

In addition to the flame-resistant qualities fire barrier fabrics, such as Herculite’s line of Sure-Chek fabrics, these fabrics also include built-in resistance to fluid penetration.  This type of protection is valuable in health care settings and other commercial residential environments (such as dormitories, prisons, or cruise ships) where the spread of bacteria should be mitigated to protect patients, residents, and staff.

The cost of non-compliance with 16 CFR Part 1633 and the other standards when applicable, such as California Technical Bulletin 129 and California Technical Bulletin 133 or Boston Fire Code 9-XII, which govern open flame and complete chair burn test criteria can be high, not the least of which is a barrier to entry into the market itself. Be certain to choose a reputable manufacturer upon whose assertions and certifications you can rely before you buy. After you find out you bought an inferior product and the damage has been done, it’s too late.

How to Care for your Vinyl Banner: Making it Last

Understanding what vinyl is made of is the first step in taking care of your vinyl banner.