Awning Evolution Thru the Ages

Awnings are a lot older than you might think. In fact, awnings date back to ancient Egyptian and Syrian times, according to the National Park Service. Awnings are a lot older than you might think. In fact, awnings date back to ancient Egyptian and Syrian times, according to the National Park Service, U.S. Department of the Interior. Woven mats were used to shade market stalls and homes and in the Roman Empire, awnings were used in stadiums like the Coliseum! Roman awnings were retractable and made from fabrics like linen. Awnings were used to protect people from the sun and bad weather. And today, we know that awnings can reduce air conditioning costs by as much as 25 percent and protect us from harmful UV rays!

Since those ancient times, awning evolution continued throughout the world. From shading amphitheaters, to markets and homes, awnings have proven to not only be common but they have become useful and sometime essential building accessories.

By the early-19th century, awnings were a common sight. Fabrics including canvas were used in production of awnings which were placed connected to buildings as an extension and shade area. These fixed awnings were very popular at the time because they provided natural climate control. But the construction of awnings was pretty simple; cast iron posts were used with a front cross bar which linked it to the building.

By the latter half of the 19th century, awnings became operable meaning that the awnings could be raised and retracted using a simple rope and pulley system. But, the drawbacks of the operable awnings didn’t allow for the material to be fully protected from harsh weather and moisture would pool. The fabric also had to be neatly folded or it would look messy. That’s when the roller awning made its debut. The roller awning utilized a wood or metal cylinder which allowed the awning material to be stored properly when it was retracted; thus no mess and no exposure to wind, sun, rain or snow when it wasn’t in use. The roller awning used a detachable handle or gearbox for retraction.

Even the type of frames used to construct awnings has changed. In ancient times, timber frames were used. By the 19th century iron plumbing pipe was used. By the 20th and 21st centuries, a variety of materials are used in awning frames including aluminum and stainless and galvanized steel.

Even the type of fabrics used for awnings has evolved from simple linen and canvas to things like polyester vinyl composites and acrylic as well as a variety of others. Awning fabrics can now be made waterproof, UV ray resistant, etc… Fabric manufacturers like Herculite Inc. specialize in producing textiles that have the aforementioned features and more. In fact, Herculite has a line of awning fabrics that are fire resistant, water proof, stain and mildew resistant, scratch resistant, and more! We’ve really come a long way since ancient times when awnings were made from linen!

The awning has had a long and rich history; it’s gone from being a simple construction to a complex building accessory and advertising component of many businesses. Today, awnings have evolved to include a variety of fabrics and frames which retract, are fixed and utilize different shapes, colors, and sizes. You can get awnings with your own printed design and in have it in different shapes.

Today, you can even have your awning custom engineered. It’s really amazing how far we’ve come when we you think about the evolution of the awning and where we were and where we are now. For more information about awning fabrics, visit www.herculite.com. 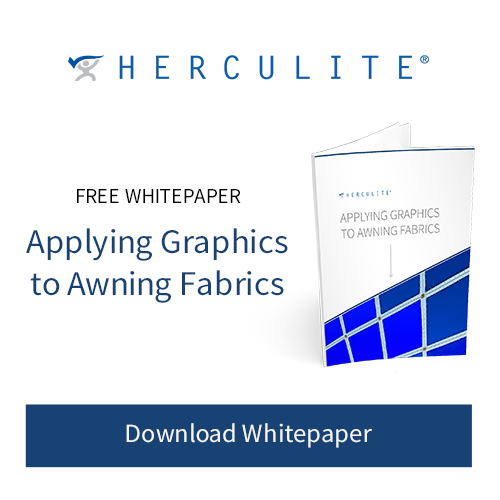 An awning invites people to come in and enjoy what your store has to offer. You can increase revenue with commercial awnings.

Understand the different types and fabrics used for awnings to best fit your awning need and situation.

Did you know that awnings provide more than just shade? Awnings can actually cut your energy bill down and save you hundreds of dollars. In fact, a...