Closing the Curtain on MRSA Infections with Medical Fabrics Surfaces

High-tech medical fabrics used to make divider curtains are among a hospital’s first line of defense in stopping the spread of disease. 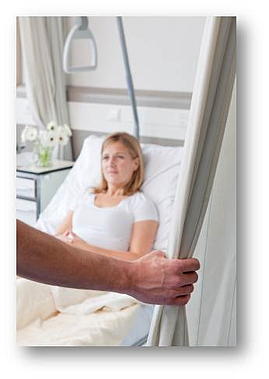 A September 2011 article in the Healthland column on Time.com reported on the findings some University of Iowa researchers presented at a scientific conference in Chicago earlier that week. To the author’s chagrin, the scientists had confirmed what the author thought to be obvious: 95 percent of hospital privacy curtains contained harmful pathogens, most notably methicillin-resistant Staphylococcus aureus (MRSA) and vancomycin-resistant enterococcus (VRE).

Even brand-new curtains were contaminated, the researchers discovered, within seven days of being installed.

The author noted that one of the study’s researchers received some consulting fees from a medical curtain fabric manufacturer (not Herculite) and suggested the researcher might have been biased because of that. The author then flippantly went on to suggest the entire problem of disease-causing pathogenic contaminants could be eliminated if only the doctors washed their hands.

Odds the Study Was Unbiased

While it’s possible that one researcher was biased because of some consulting fee, that doesn’t explain the clearly unbiased behaviors of the study’s other six authors (and their inclination to stifle any biases in their colleague).

And, as implausible as it may seem to the article’s author, 1) Doctors already know they’re supposed to wash their hands and 2) Doctors hands aren’t the only ones present in any hospital setting. Nurses, patients, hospital staff, patients’ families, vendors, law enforcement, the list of visitors to a hospital goes on and on. If simply having doctors wash their hands could rid hospitals of MRSAs, the problem would have been solved long ago. Instead, government reports show the superbugs have only proliferated geometrically. There were less than 2,000 reported cases of MRSA in 1993. By 2005, researchers from the Centers for Disease Control and reporting in the Journal of the American Medical Association estimated 94,000 cases and 18,650 deaths due to MRSA in the U.S..

Staph infections and the horrible health and financial consequences they pose are still there lingering around every fold of a hospital curtain. And those high-tech medical fabrics used to make those curtains—they are among a hospital’s first line of defense in stopping the spread of disease. The advanced antimicrobial properties of medical curtain fabrics, such as Sure-Chek, perpetually release antimicrobial agents to stop the spread of germs on the surfaces where they are most likely to congregate.

With a high-quality medical curtain fabric like Sure-Chek, the antimicrobial properties are tested to stringent industry standards, such as AATCC 147 and ISO 22196. What’s more, they’re flame-resistant, wipe clean to remove stains, oils, and contaminants, are anti-static to ensure proper functioning of sensitive medical equipment, and constructed to meet durability standards that make them as economical as they are decorative.

All the bio-engineering in the world isn’t likely to produce an infallible physician anytime soon. Instead, infection control managers might best be served by continuing to pursue cleanliness awareness campaigns while hedging their bets with proven technologies, such as the antimicrobial medical curtain fabrics designed and proven to be effective at killing MRSAs.

The last thing a designer wants is to see a fantastic concept for a hospital room undone by poor medical mattress fabrics. Here's how to avoid that...

Hospital curtains serve many important functions, so selecting the right fabrics for the patient space you are designing is key.